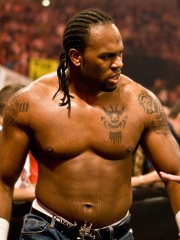 Shad Gaspard (January 13, 1981 – May 17, 2020) was an American professional wrestler and actor. He was best known for his time with WWE, where he performed under his real name, or simply Shad.Gaspard signed with World Wrestling Entertainment (now WWE) in 2003, where he was assigned to their developmental territory Ohio Valley Wrestling (OVW), and was a two-time OVW Southern Tag Team Champion (with JTG, as part of Cryme Tyme). In 2006, Cryme Tyme was promoted to WWE's main roster, before both Gaspard and JTG were released from the company the following year. Read more on Wikipedia

Since 2007, the English Wikipedia page of Shad Gaspard has received more than 1,629,724 page views. His biography is available in 16 different languages on Wikipedia making him the 485th most popular wrestler.