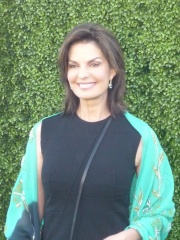 Sela Ann Ward (born July 11, 1956) is an American actress, author, and producer. Her breakthrough TV role was as Teddy Reed in the NBC drama series Sisters (1991–96), for which she received her first Primetime Emmy Award for Outstanding Lead Actress in a Drama Series in 1994. She received her second Primetime Emmy Award and Golden Globe Award for Best Actress – Television Series Drama for the leading role of Lily Manning in the ABC drama series Once and Again (1999–2002). Read more on Wikipedia

Since 2007, the English Wikipedia page of Sela Ward has received more than 3,772,527 page views. Her biography is available in 34 different languages on Wikipedia making her the 1,894th most popular actor.