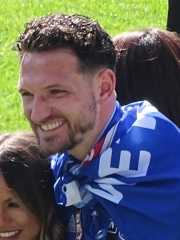 Sean Joseph Morrison (born 8 January 1991) is an English professional footballer who captains and plays as a centre back for Championship club Cardiff City. He began his career as a youth player with Plymouth Argyle but was released in 2007, joining Swindon Town where he made his professional debut. He went on to make 50 appearances in the Football League for Swindon, spending time on loan with Southend United. Read more on Wikipedia

Among soccer players, Sean Morrison ranks 16,617 out of 16,923. Before him are Kenjiro Ogino, Ryutaro Shibata, Yota Shimokawa, Siobhan Chamberlain, Hirokazu Ishihara, and Shunta Nakamura. After him are Yusei Kayanuma, Hiroki Maeda, Morgan Brian, Tomofumi Fujiyama, Yo Uematsu, and Yuki Nishiya.