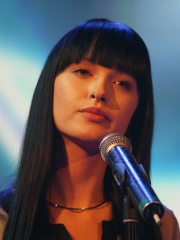 Sandra Nurmsalu (born 6 December 1988) is an Estonian singer, songwriter, and violinist. Recognized within Estonia for her genre-bending style, Nurmsalu has garnered success as both the lead singer of Urban Symphony and as a solo artist. Nurmsalu rose to prominence in Estonia during her participation in the 2007 edition of the Eesti Televisioon (ETV) talent competition Kaks takti ette. Read more on Wikipedia

Since 2007, the English Wikipedia page of Sandra Nurmsalu has received more than 36,381 page views. Her biography is available in 24 different languages on Wikipedia making her the 2,577th most popular singer.

Among singers, Sandra Nurmsalu ranks 2,592 out of 3,001. Before her are Cleopatra Stratan, LaFee, Christine Guldbrandsen, Reina Tanaka, Galena, and David Archuleta. After her are Keisha Buchanan, Frans Jeppsson Wall, Mack 10, Meek Mill, May'n, and Andy Abraham.

Among SINGERS In Estonia