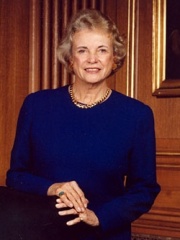 Sandra Day O'Connor (born March 26, 1930) is an American attorney, politician, and jurist who served as an Associate Justice of the Supreme Court of the United States from 1981 until her retirement in 2006. She was the first woman to serve on the Court.Prior to O'Connor's tenure on the Court, she was a judge and an elected official in Arizona, serving as the first female Majority Leader of a state senate as the Republican leader in the Arizona Senate. Upon her nomination to the Court, O'Connor was confirmed unanimously by the Senate. Read more on Wikipedia

Since 2007, the English Wikipedia page of Sandra Day O'Connor has received more than 4,069,011 page views. Her biography is available in 28 different languages on Wikipedia making her the 10,839th most popular politician.