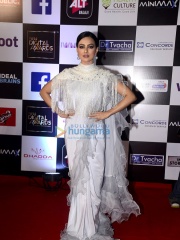 Sana Khan is a former Indian actress, model and dancer. Khan began her career in modelling and went on to appear in advertisements and feature films. She has appeared in Hindi, Malayalam, Tamil, Kannada and Telugu language films, TV commercials, dance performances in films in special appearance, and for a reality television show. Read more on Wikipedia

Since 2007, the English Wikipedia page of Sana Khan has received more than 3,283,835 page views. Her biography is available in 18 different languages on Wikipedia making her the 8,747th most popular actor.