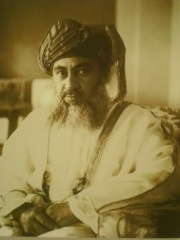 Said bin Taimur (13 August 1910 – 19 October 1972; Arabic: سعيد بن تيمور‎; ) was the 13th Sultan of Muscat and Oman from 10 February 1932 until he was deposed on 23 July 1970 by his son Qaboos bin Said. He was a member of the House of Al Said who in 1932 became the Sultan of Muscat and Oman, succeeding his father Taimur bin Feisal who had abdicated for financial reasons. The 21-year-old Said inherited an administration that was in debt. Read more on Wikipedia

Since 2007, the English Wikipedia page of Said bin Taimur has received more than 600,068 page views. His biography is available in 18 different languages on Wikipedia making him the 5,568th most popular politician.