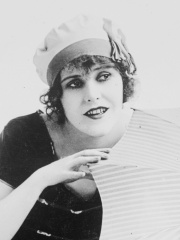 Since 2007, the English Wikipedia page of Ruth Roland has received more than 46,713 page views. Her biography is available in 15 different languages on Wikipedia making her the 5,235th most popular actor.

Among people born in 1892, Ruth Roland ranks 194. Before her are Marston Morse, Seiichiro Kashio, Alfred Lunt, Ezio Pinza, Ferde Grofé, and Ruth Chatterton. After her are Elizabeth Ryan and William Demarest. Among people deceased in 1937, Ruth Roland ranks 110. Before her are Howie Morenz, Gyula Juhász, Magnús Guðmundsson, Grafton Elliot Smith, R. J. Mitchell, and Ellen Hansell. After her are Ross Alexander and Marie Prevost.