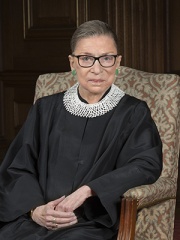 Ruth Bader Ginsburg (/ˈbeɪdər ˈɡɪnzbɜːrɡ/ BAY-dər GINZ-burg; born Joan Ruth Bader; March 15, 1933 – September 18, 2020) was an associate justice of the Supreme Court of the United States from 1993 until her death in September 2020. She was nominated by President Bill Clinton and at the time was generally viewed as a moderate consensus-builder. She eventually became part of the liberal wing of the Court as the Court shifted to the right over time. Read more on Wikipedia

Since 2007, the English Wikipedia page of Ruth Bader Ginsburg has received more than 24,737,261 page views. Her biography is available in 28 different languages on Wikipedia making her the 5th most popular judge.

Among judges, Ruth Bader Ginsburg ranks 5 out of 23. Before her are Deborah, Roland Freisler, Giovanni Falcone, and Adly Mansour. After her are Paolo Borsellino, Fritz Bauer, Zaleucus, Antonin Scalia, John Marshall, Panagiotis Pikrammenos, and Vassiliki Thanou-Christophilou.