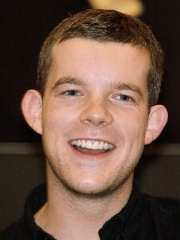 Russell George Tovey (born 14 November 1981) is an English actor. He is known for playing the role of werewolf George Sands in the BBC's supernatural drama Being Human, Rudge in both the stage and film versions of The History Boys, Steve in the BBC Three sitcom Him & Her, Kevin Matheson in the HBO original series Looking and its subsequent series finale television film Looking: The Movie, Titanic midshipman Alonzo Frame in the Doctor Who episode "Voyage of the Damned" (a role he reprised in a cameo in "The End of Time: Part Two") and as Henry Knight in BBC TV series Sherlock. Read more on Wikipedia