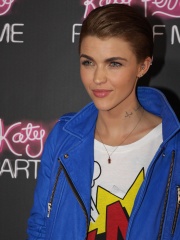 Ruby Rose Langenheim (born 20 March 1986) is an Australian model, actress, and television presenter. Rose came to attention as a presenter on MTV Australia (2007–2011), followed by several high-profile modelling gigs, notably as the face of Maybelline New York in Australia. Read more on Wikipedia

Since 2007, the English Wikipedia page of Ruby Rose has received more than 17,302,668 page views. Her biography is available in 29 different languages on Wikipedia making her the 3,730th most popular actor.