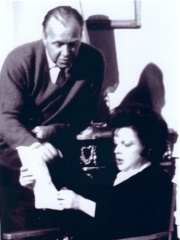 Ronald Elwin Neame CBE BSC (23 April 1911 – 16 June 2010) was an English film producer, director, cinematographer, and screenwriter. Beginning his career as a cinematographer, for his work on the British war film One of Our Aircraft Is Missing (1943) he received an Academy Award nomination for Best Special Effects. Read more on Wikipedia

Since 2007, the English Wikipedia page of Ronald Neame has received more than 151,705 page views. His biography is available in 24 different languages on Wikipedia making him the 560th most popular film director.

Among film directors, Ronald Neame ranks 562 out of 1,305. Before him are Wojciech Has, Paul Grimault, John Lasseter, Anthony Asquith, Tom Holland, and James Wong. After him are John Landis, Claude Pinoteau, Sam Mendes, André Hunebelle, Urban Gad, and Rudolph Maté.