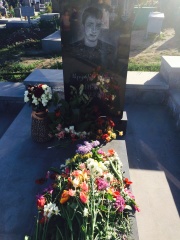 Robert Abajyan (Armenian: Ռոբերտ Աբաջյան; 16 November 1996 – 2 April 2016) was an Armenian junior sergeant in the Nagorno-Karabakh Republic Defense Army. He was posthumously awarded with "Hero of Artsakh" which is the highest honorary title of semi-recognized NKR. Abajyan is the youngest person to be awarded the title at 19 years old.Abajyan fought for several hours against special forces groups of the Azerbaijani Armed Forces during the Armenian–Azerbaijani clashes of 2016 in the northeast line of contact on the night of 1–2 April. Read more on Wikipedia

Since 2007, the English Wikipedia page of Robert Abajyan has received more than 48,059 page views. His biography is available in 17 different languages on Wikipedia making him the 14,716th most popular politician.