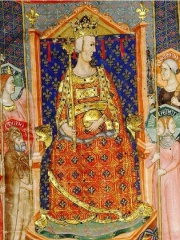 Robert of Anjou (Italian: Roberto d'Angiò), known as Robert the Wise (Italian: Roberto il Saggio; 1276 – 20 January 1343), was King of Naples, titular King of Jerusalem and Count of Provence and Forcalquier from 1309 to 1343, the central figure of Italian politics of his time. Read more on Wikipedia

Robert, King of Naples is most famous for being the son of Charles II of Naples and Maria of Hungary. He was an intelligent and cultured man who spoke six languages. He was also a patron of the arts and sciences.

Page views of Robert, King of Naples by language

Among politicians, Robert, King of Naples ranks 2,332 out of 15,710. Before him are Khaba, Volusianus, Mus‘ab ibn 'Umair, Cecily Neville, Duchess of York, Occhiali, and Al-Hadi. After him are Maria Ludovika of Austria-Este, Prajadhipok, Mieszko I of Poland, Juscelino Kubitschek, Emperor Zhao of Han, and Donald Tusk.