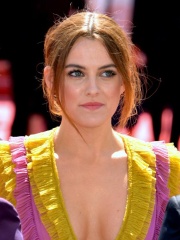 Danielle Riley Keough ( KEE-oh; born May 29, 1989) is an American actress, model, and producer, known primarily for her appearances in independent films. Additionally, she has been noted as a scream queen for her performances in numerous horror films. Born in Santa Monica, California to musicians Lisa Marie Presley and Danny Keough, she is the eldest grandchild of Elvis and Priscilla Presley. Read more on Wikipedia

Since 2007, the English Wikipedia page of Riley Keough has received more than 10,914,029 page views. Her biography is available in 27 different languages on Wikipedia making her the 6,447th most popular actor.

Among actors, Riley Keough ranks 6,367 out of 8,832. Before her are Audra McDonald, Stephen Graham, Cláudia Abreu, Fumiko Orikasa, Anthony Ruivivar, and Princess Theodora of Greece and Denmark. After her are Wendi McLendon-Covey, Émilie Dequenne, Alicia Machado, Belinda Peregrín, Ron Glass, and Louis Ferreira.