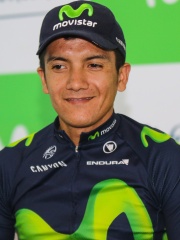 Richard Antonio Carapaz Montenegro (born 29 May 1993) is an Ecuadorian professional road racing cyclist who currently rides for UCI WorldTeam Ineos Grenadiers. Carapaz won the 2019 Giro d'Italia, becoming the first Ecuadorian rider to win the race. In July 2021, he won the gold medal in the road race at the 2020 Summer Olympics, becoming the first Ecuadorian cyclist to win a medal and only the second Ecuadorian to win a gold medal at the Olympic Games. Read more on Wikipedia