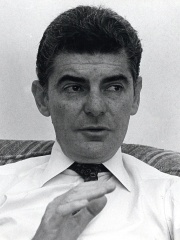 Richard Samuel Benjamin (born May 22, 1938) is an American actor and film director.He has starred in a number of well-known film productions, including Goodbye, Columbus (1969), based on the novella by Philip Roth; Catch-22 (1970), from the Joseph Heller best-seller; Westworld (1973), a science-fiction thriller by Michael Crichton; and The Sunshine Boys (1975), written by Neil Simon.After directing for television, his first film as director was the 1982 comedy My Favorite Year. Read more on Wikipedia

Since 2007, the English Wikipedia page of Richard Benjamin has received more than 1,239,214 page views. His biography is available in 21 different languages on Wikipedia making him the 3,836th most popular actor.

Among actors, Richard Benjamin ranks 3,788 out of 8,832. Before him are Juanita Moore, Mathilda May, Anita Stewart, Kerwin Mathews, David Keith, and Leon Lai. After him are Jeanne Eagels, Kevin Smith, Susanna Hoffs, Claudia Wells, Carla Laemmle, and Maribel Verdú.