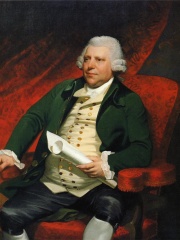 Sir Richard Arkwright (23 December 1732 – 3 August 1792) was an English inventor and a leading entrepreneur during the early Industrial Revolution. He is credited as the driving force behind the development of the spinning frame, known as the water frame after it was adapted to use water power; and he patented a rotary carding engine to convert raw cotton to "cotton lap" prior to spinning. He was the first to develop factories housing both mechanised carding and spinning operations.Arkwright's achievement was to combine power, machinery, semi-skilled labour and the new raw material of cotton to create mass-produced yarn. Read more on Wikipedia

Since 2007, the English Wikipedia page of Richard Arkwright has received more than 608,197 page views. His biography is available in 39 different languages on Wikipedia making him the 82nd most popular inventor.