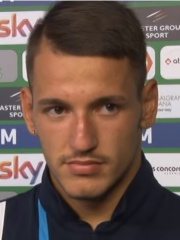 Rey Aldo Manaj (born 24 February 1997) is an Albanian professional footballer who plays as a striker for Spanish team Barcelona and the Albania national team. Read more on Wikipedia

Since 2007, the English Wikipedia page of Rey Manaj has received more than 519,353 page views. Her biography is available in 21 different languages on Wikipedia. Rey Manaj is the 8,046th most popular soccer player.