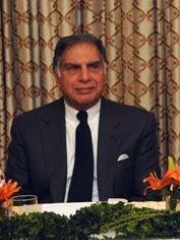 Ratan Naval Tata (born 28 December 1937) is a Parsi Indian industrialist, investor, philanthropist, and a former chairman of Tata Sons. He was also chairman of Tata Group, from 1990 to 2012, and again, as interim chairman, from October 2016 through February 2017, and continues to head its charitable trusts. He is the recipient of two of the highest civilian awards of India – Padma Vibhushan (2008) and Padma Bhushan (2000). Read more on Wikipedia

Since 2007, the English Wikipedia page of Ratan Tata has received more than 5,061,584 page views. His biography is available in 33 different languages on Wikipedia making him the 207th most popular businessperson.

Most Popular BUSINESSPEOPLE in Wikipedia