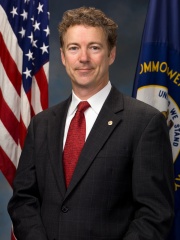 Randal Howard Paul (born January 7, 1963) is an American politician and physician serving as the junior United States Senator from Kentucky since 2011. He is the son of former U.S. Representative Ron Paul of Texas who was a presidential candidate in 1988, 2008, and 2012. Born in Pittsburgh, Pennsylvania, Paul attended Baylor University and is a graduate of the Duke University School of Medicine. Read more on Wikipedia

Since 2007, the English Wikipedia page of Rand Paul has received more than 4,810,793 page views. His biography is available in 42 different languages on Wikipedia making him the 13,181st most popular politician.