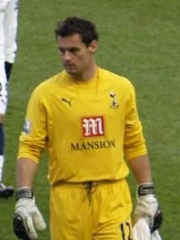 Radek Černý (Czech pronunciation: [ˈradek ˈtʃerniː]; born 18 February 1974) is a Czech former footballer who played as a goalkeeper. He played principally for Slavia Prague in the Czech First League between its inception in 1993 and 2005, when he moved to England. Černý spent eight years in England with Tottenham Hotspur and Queens Park Rangers before returning to his former club Slavia in 2013, where he played one season before his retirement. Read more on Wikipedia

Since 2007, the English Wikipedia page of Radek Černý has received more than 51,570 page views. His biography is available in 23 different languages on Wikipedia making him the 6,204th most popular soccer player.