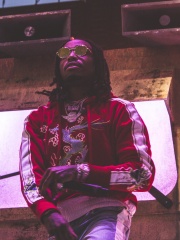 Quavious Keyate Marshall (born April 2, 1991), known professionally as Quavo (), is an American rapper, singer, songwriter, and record producer. He is best known as the cofounder and current frontman of hip hop/trap trio Migos. Quavo is related to his fellow Migos members, being Takeoff's uncle and Offset's cousin.Outside of Migos, Quavo has been featured on four singles that have peaked within the top 10 of the Billboard Hot 100, including DJ Khaled's "I'm the One" and "No Brainer" the former of which reached number 1 along with "Congratulations", which peaked at number 8 on the Billboard Hot 100. Read more on Wikipedia

Page views of Quavos by language

Among singers, Quavo ranks 3,112 out of 3,541. Before her are Brooke Fraser, Pasha Parfeny, Natasha Thomas, Aistė Smilgevičiūtė, Heo Young-saeng, and Elina Duni. After her are Margaret, Momoko Tsugunaga, Eri Kamei, Yuka Kashino, Lydia, and Nadav Guedj.