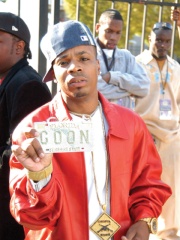 Algernod Lanier Washington (born July 1, 1976), better known by his stage name Plies, is an American rapper and songwriter. Born in Fort Myers, Florida, Washington was a wide receiver on the Miami Redskins football team of Miami University in Ohio in 1996 and 1997 before beginning his musical career. After dropping out of college, he founded Big Gates with his stepbrother. Read more on Wikipedia

Since 2007, the English Wikipedia page of Plies has received more than 439,162 page views. His biography is available in 17 different languages on Wikipedia making him the 2,899th most popular singer.

Page views of Plies by language

Among singers, Plies ranks 2,914 out of 3,001. Before him are Amjad Sabri, Cashis, Thea Garrett, Kiiara, Ella Eyre, and Chance the Rapper. After him are Ronan Parke, Ralf Mackenbach, Nina Radojičić, Louise Redknapp, Alexander Ivanov, and Lexa.