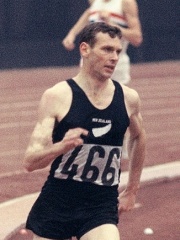 Sir Peter George Snell (17 December 1938 – 12 December 2019) was a New Zealand middle-distance runner. He won three Olympic gold medals, and is the only man since 1920 to have won the 800 and 1500 metres at the same Olympics, in 1964. Snell had a relatively short career as a world-famous international sportsman, 1960–1965, yet achieved so much that he was voted New Zealand's "Sports Champion of the (20th) Century" and was one of 24 inaugural members of the International Association of Athletics Federations Hall Of Fame named in 2012. Read more on Wikipedia

Since 2007, the English Wikipedia page of Peter Snell has received more than 219,358 page views. His biography is available in 26 different languages on Wikipedia making him the 214th most popular athlete.

Among ATHLETES In New Zealand