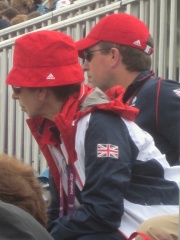 Peter Mark Andrew Phillips (born 15 November 1977) is a member of the British royal family. He is the elder child and only son of Anne, Princess Royal, and her first husband, Captain Mark Phillips. He is the eldest grandchild of Queen Elizabeth II and Prince Philip, Duke of Edinburgh. Read more on Wikipedia

Since 2007, the English Wikipedia page of Peter Phillips has received more than 3,967,211 page views. His biography is available in 29 different languages on Wikipedia making him the 11,349th most popular nobleman.

Among noblemen, Peter Phillips ranks 548 out of 559. Before him are Liudolf, Duke of Swabia, Conan I of Rennes, Bivin of Gorze, Albert I, Duke of Brunswick-Lüneburg, Ermengarde of Anjou, Duchess of Burgundy, and Princess Margaretha of Liechtenstein. After him are Cynegils, Princess Beatrice of York, Zara Tindall, Princess Adelheid of Schaumburg-Lippe, Magdalena Sibylla of Holstein-Gottorp, and Prince George of Cambridge.