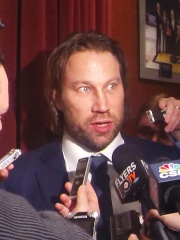 Peter Mattias Forsberg (pronounced [ˈpěːtɛr ˈfɔ̂ʂːbærj] (listen); born 20 July 1973) is a Swedish former professional ice hockey player and was for a time assistant general manager of Modo Hockey. Nicknamed "Peter the Great" and "Foppa", Forsberg was known for his on-ice vision and physical play, and is considered one of the greatest players of all time. Although his career was shortened by persistent injuries, as of 2021, he stands ninth all-time in career points-per-game and fifth all-time in career assists-per-game in the NHL, only behind Wayne Gretzky, Mario Lemieux, Bobby Orr, and Connor McDavid. Read more on Wikipedia

Among HOCKEY PLAYERS In Sweden