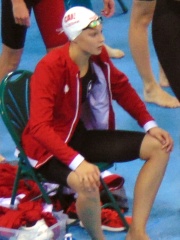 Penelope Oleksiak (born June 13, 2000) is a Canadian-American competitive swimmer who specializes in the freestyle and butterfly events. During the 2016 Summer Olympics, she became the first Canadian to win four medals in the same Summer Games and the country's youngest Olympic champion, with a gold in the 100 m freestyle, a silver in the 100 m butterfly, and two bronzes in the women's freestyle relays (4×100 m and 4×200 m). With her gold medal win, she became the first athlete born in the 2000s to claim an Olympic gold medal in an individual event.One year prior, Oleksiak had won six medals at the 2015 FINA World Junior Swimming Championships. Read more on Wikipedia

Among SWIMMERS In Canada