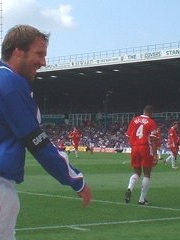 Paul Charles Merson (born 20 March 1968) is an English football television pundit and former professional footballer and manager. Originally a forward, Merson found success as an attacking midfielder and playmaker later in his career.After making his debut for Arsenal in the 1986–87 season, Merson went on to play eleven seasons with the North London club. While with the Gunners, Merson was a key player in the club's success under Scottish manager George Graham, winning the Football League Championship twice, the FA Cup, the Football League Cup, and the European Cup Winners' Cup. Read more on Wikipedia