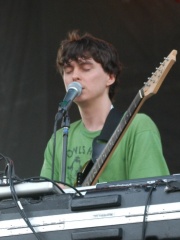 Noah Benjamin Lennox (born July 17, 1978), also known by his moniker Panda Bear, is an American musician, singer-songwriter and co-founding member of the experimental pop band Animal Collective. In addition to his work with that group, Lennox has released six solo LPs since 1999. His third, Person Pitch (2007), is noted for influencing a wide range of subsequent indie music in addition to inspiring the chillwave genre and numerous soundalike acts.Lennox was primarily raised in Baltimore, Maryland, where he sang tenor in his high school chamber choir, and studied piano and cello. Read more on Wikipedia

Since 2007, the English Wikipedia page of Panda Bear has received more than 149,338 page views. His biography is available in 15 different languages on Wikipedia making him the 2,205th most popular musician.