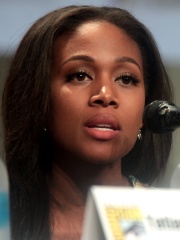 Nicole Beharie (born January 3, 1985) is an American actress and singer. She is best known for her starring roles in films such as the drama American Violet (2008), the psychological drama Shame (2011), the biographical sports drama 42 (2013), the crime drama Monsters and Men (2018), and the independent drama Miss Juneteenth (2020). Read more on Wikipedia

Since 2007, the English Wikipedia page of Nicole Beharie has received more than 2,713,373 page views. Her biography is available in 17 different languages on Wikipedia making her the 8,031st most popular actor.