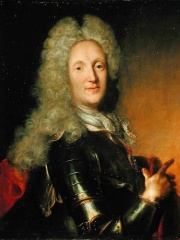 Nicolas Catinat (1 September 1637 – 22 February 1712) was a French military commander and Marshal of France under Louis XIV. The son of a magistrate, Catinat was born in Paris on 1 September 1637. He entered the Gardes Françaises at an early age and distinguished himself at the Siege of Lille in 1667. He became a brigadier ten years later, maréchal de camp in 1680, and lieutenant-general 1688. Read more on Wikipedia

Since 2007, the English Wikipedia page of Nicolas Catinat has received more than 24,060 page views. His biography is available in 21 different languages on Wikipedia making him the 5,211th most popular politician.

Among politicians, Nicolas Catinat ranks 5,181 out of 14,801. Before him are Liuva I, Charlotte Amalie of Hesse-Kassel, Fatmir Sejdiu, William II, Duke of Bavaria, Ermesinde of Carcassonne, and Amadou Toumani Touré. After him are Chadae of Goguryeo, Lakhdar Brahimi, Qakare Ibi, Rumen Radev, Sindae of Goguryeo, and Burt Munro.