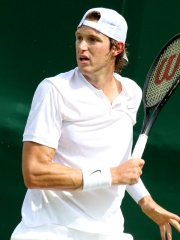 Nicolás Jarry Fillol (Spanish pronunciation: [nikoˈlaz ˈʝari]; French: Nicolas Jarry, pronounced [nikɔla ʒaʁi]; born 11 October 1995) is a professional tennis player from Chile. He has won one tournament in singles and two in doubles on the ATP Tour. He achieved his highest ATP singles ranking of 38 in July 2019, after clinching his first ATP title in Bastad. Read more on Wikipedia

Since 2007, the English Wikipedia page of Nicolás Jarry has received more than 199,628 page views. Her biography is available in 17 different languages on Wikipedia making her the 672nd most popular tennis player.