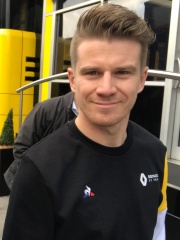 Nicolas Hülkenberg (German pronunciation: [ˈniːko ˈhʏlkənbɛɐ̯k], born 19 August 1987) is a German professional racing driver who drove in Formula One in 2010 and from 2012 to 2020. In 2015, he also contested two rounds of the 2015 FIA World Endurance Championship season for Porsche, winning the 24 Hours of Le Mans on his first attempt. He was the 2009 champion of the GP2 Series, and is a previous champion of both the Formula 3 Euro Series and A1 Grand Prix, as part of A1 Team Germany. Read more on Wikipedia

Since 2007, the English Wikipedia page of Nico Hülkenberg has received more than 1,527,509 page views. His biography is available in 49 different languages on Wikipedia making him the 427th most popular racing driver.