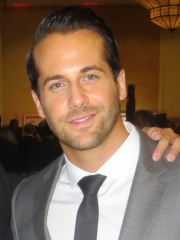 Niall Matter ( NYLE MAY-tər; born October 20, 1980) is a Canadian-American actor. Following recovery from a serious accident sustained while working on an oil rig, Matter chose to pursue a full-time acting career. He received his first significant break in 2007, with a main role in teen drama The Best Years. Read more on Wikipedia

Since 2007, the English Wikipedia page of Niall Matter has received more than 976,982 page views. Her biography is available in 16 different languages on Wikipedia making her the 8,485th most popular actor.