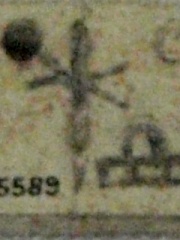 Neithhotep or Neith-hotep was an ancient Egyptian queen consort living and ruling during the early First Dynasty. She was once thought to be a male ruler: her outstandingly large mastaba and the royal serekh surrounding her name on several seal impressions previously led Egyptologists and historians to the erroneous belief that she might have been an unknown king.As the understanding of early Egyptian writings developed, scholars learned that Neithhotep was in fact a woman of extraordinary rank. She was subsequently considered to be the wife of unified Egypt's first pharaoh, Narmer, and the mother of Hor-Aha. Read more on Wikipedia

Page views of Neithhoteps by language

Among companions, Neithhotep ranks 492 out of 687. Before her are Sophia Jagiellon, Margravine of Brandenburg-Ansbach, Iput, Gaius Laelius Sapiens, Juana Manuel, Fernán González of Castile, and Euphrosyne of Kiev. After her are Aregund, Prince George William of Hanover, Eleanor of Anjou, Vashti, Muniadona of Castile, and Marcia Otacilia Severa.