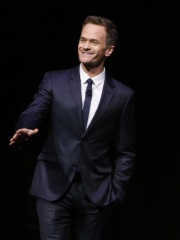 Neil Patrick Harris (born June 15, 1973) is an American actor, singer, writer, producer, and television host. Primarily known for his comedic television roles and dramatic and musical stage roles, he has received multiple accolades throughout his career, including a Tony Award, five Primetime Emmy Awards, and nominations for a Grammy Award and three Screen Actors Guild Awards. On television, he is known for playing the title character on the ABC series Doogie Howser, M.D. Read more on Wikipedia

/FILM
Neil Patrick Harris Hated The Title Of How I Met Your Mother
As much as actors, writers, and artists in general dream big about the next project they have lined up, the truth is few (if anyone) can predict when a specific movie or show contains the mysterious alchemy that adds up to a runaway pop culture phenomenon. Af…
Jeremy Mathai
Livejournal.com
Neil Patrick Harris Needs Magic to Escape Spicy Wings
-He talks about how shows need to respect their audience and not tell them every few minutes what's coming up in the episode they are currently watching-He explains how he filmed the famous death scene in Gone Girl-He talks about Uncoupled-He does a magic tri…
evillemmons
ETCanada.com
Neil Patrick Harris Goes For Seconds On ‘Hot Ones’: ‘It’s F**king Really Hot’
Neil Patrick Harris can take the heat. The "Uncoupled" star is on the latest episode of "Hot Ones", answering questions about his life and career, while eating progressively spicier and spicier wings. [readmore label="READ MORE: " link="https://etcanada.com/n…
Corey Atad