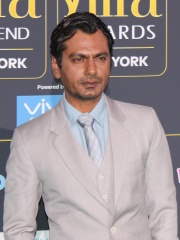 Nawazuddin Siddiqui ([nəˈwaːzʊdːiːn sɪdːiːki]; born 19 May 1974) is an Indian actor known for his work in Hindi cinema. He is an alumnus of the National School of Drama. Siddiqui's feature film debut was alongside director Prashant Bhargava in Patang (2012), and his performance was appreciated by cinema critic Roger Ebert. Read more on Wikipedia