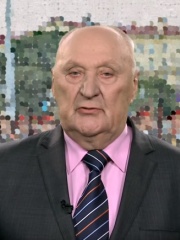 Myechyslaw Ivanavich Hryb (born on 25 September 1938) was the eleventh Chairman of the Supreme Soviet of Belarus from 28 January 1994 to 10 January 1996. In his capacity as the head of state, Hryb adopted the first Constitution of Belarus. He succeeded Stanislav Shushkevich and was head of state from 28 January to 20 July 1994 until Alexander Lukashenko replaced him in the new office called President of Belarus, which became the new head of state office. Read more on Wikipedia

Among politicians, Myechyslaw Hryb ranks 6,018 out of 15,710. Before her are Zhang Chunqiao, Chen Yun, Rothari, Chung Sye-kyun, Belisario Betancur, and Wacho. After her are Helena of Moscow, Glaucus of Corinth, Jacques-Charles Dupont de l'Eure, Leonor Teles, Quintus Caecilius Metellus Macedonicus, and Şahin Giray.