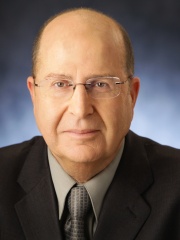 Moshe "Bogie" Ya'alon (Hebrew: משה יעלון; born Moshe Smilansky on 24 June 1950) is an Israeli politician and former Chief of Staff of the Israel Defense Forces, who also served as Israel's Defense Minister under Benjamin Netanyahu from 2013 until his resignation on 20 May 2016. Ya'alon ran for Knesset in 2019 as the number three member of the Blue and White party, a joint list created by the merging of the Israel Resilience Party, led by former IDF chief of staff Benny Gantz, and Yesh Atid, led by Yair Lapid. Ya'alon briefly served as the number 2 on the Yesh Atid-Telem list that was created following the 2020 Israeli legislative election. Read more on Wikipedia

Among politicians, Moshe Ya'alon ranks 9,340 out of 15,710. Before him are Gertrude of Süpplingenburg, Harilal Gandhi, Jan P. Syse, Kiến Phúc, Petro Shelest, and Diego Martínez Barrio. After him are Saigō Jūdō, Euphemus, Missak Manouchian, John Albert I, Duke of Mecklenburg, Pietro Grimani, and Saadeddine Othmani.