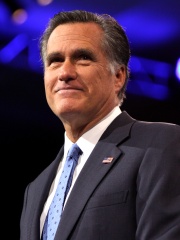 Willard Mitt Romney (born March 12, 1947) is an American politician, businessman and former presidential candidate who has served as the junior United States senator from Utah since January 2019. He previously served as the 70th Governor of Massachusetts from 2003 to 2007 and was the Republican Party's nominee for President of the United States in the 2012 election. Raised in Bloomfield Hills, Michigan, by his parents, George and Lenore Romney, he spent over two years from 1966 in France as a Mormon missionary. Read more on Wikipedia

Since 2007, the English Wikipedia page of Mitt Romney has received more than 8,984,370 page views. His biography is available in 84 different languages on Wikipedia making him the 5,892nd most popular politician.

Among politicians, Mitt Romney ranks 5,856 out of 14,801. Before him are Mahmud Barzanji, Gaykhatu, Chen Yi, Agesipolis I, Ōyama Iwao, and Ghiyas ud din Balban. After him are Hiawatha, Prince Robert, Duke of Chartres, Artabanus II of Parthia, Johan Ferrier, Matthias Erzberger, and Boran.