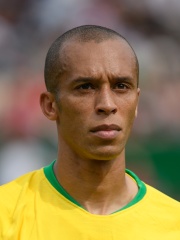 João Miranda de Souza Filho (born 7 September 1984), also known as João Miranda, or simply Miranda (Brazilian Portuguese: [miˈrɐ̃dɐ]), is a Brazilian footballer who plays as a central defender for Chinese club Jiangsu Suning and the Brazil national team. Having begun his career at Coritiba, he spent the 2005–06 season with Sochaux in France before returning to Brazil to play for São Paulo. He won three consecutive Campeonato Brasileiro Série A titles, and was named in the Team of the Year four consecutive times from 2007 to 2010. Read more on Wikipedia

Since 2007, the English Wikipedia page of Miranda has received more than 217,778 page views. His biography is available in 43 different languages on Wikipedia making him the 2,512th most popular soccer player.

Page views of Mirandas by language