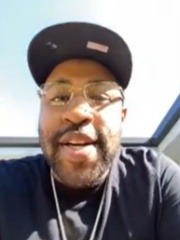 Mike Will Made It

Michael Len Williams II (born March 23, 1989), known professionally as Mike Will Made It (often stylized as Mike WiLL Made-It) or simply Mike Will, is an American record producer, rapper, songwriter and DJ. He is best known for producing trap beats for several Southern hip hop and pop artists on various commercially successful singles, including "Black Beatles" and "Powerglide" by Rae Sremmurd, "Mercy" by Kanye West, "No Lie" by 2 Chainz, "Bandz a Make Her Dance" by Juicy J, "Pour It Up" by Rihanna, "Love Me" by Lil Wayne, "Body Party" by Ciara, "We Can't Stop" by Miley Cyrus, "Formation" by Beyoncé, and "Humble" by Kendrick Lamar. Read more on Wikipedia

Page views of Mike Will Made Its by language

Among singers, Mike Will Made It ranks 3,477 out of 3,541. Before him are Lil Mama, Jasmine V, Lights, Carly Patterson, Amber Bondin, and Martin Vučić. After him are Cassadee Pope, DJ Drama, Brooke Candy, Asher Roth, Nika Turković, and Nikki Yanofsky.

Among people born in 1989, Mike Will Made It ranks 1,097. Before him are Oliver Bozanic, Maria Sanchez, Lisa Carrington, Shun Takagi, Ryan McGowan, and Dewayne Dedmon. After him are Cassadee Pope, Arina Rodionova, Junior Stanislas, Cillian Sheridan, Joel Ward, and Yuki Saneto.