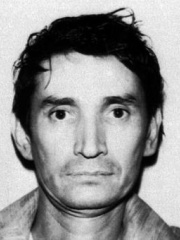 Miguel Ángel Félix Gallardo (born January 8, 1946), commonly referred to by his alias El Padrino ("The Godfather"), is a convicted Mexican drug lord who formed the Guadalajara Cartel in the 1970s, and controlled almost all of the drug trafficking in Mexico and the corridors along the Mexico–United States border. Félix Gallardo was arrested for the murder of Drug Enforcement Administration (DEA) agent Enrique "Kiki" Camarena, who was tortured to death at one of Félix Gallardo's ranches. Read more on Wikipedia

Since 2007, the English Wikipedia page of Miguel Ángel Félix Gallardo has received more than 9,302,825 page views. His biography is available in 15 different languages on Wikipedia making him the 59th most popular extremist.

Most Popular EXTREMISTS in Wikipedia