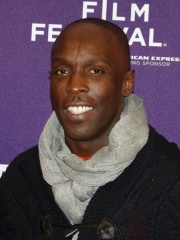 Michael Kenneth Williams (November 22, 1966 – September 6, 2021) was an American actor. He is most known for his performances as Omar Little on the HBO drama series The Wire from 2002 to 2008 and Albert "Chalky" White on the HBO series Boardwalk Empire from 2010 to 2014. He earned Primetime Emmy Award nominations for his performances in the HBO television biopic Bessie (2015), the Netflix drama series When They See Us (2019), and the HBO series The Night Of (2016) and Lovecraft Country (2020). Read more on Wikipedia

Entrepreneur
Michael K. Williams and the Mental Health Debacle in Black Communities
Mental health remains a taboo topic across global communities, but changes in workplace policies can optimize mental health and overall wellbeing especially -- for Black men and other medically underserved minorities
Dr. Sophia Ononye-Onyia
Variety
Steve McQueen on Directing Michael K. Williams in ’12 Years A Slave’: ‘He Lifted Everybody’
Steve McQueen, the British filmmaker whose most recent project is documentary series “Uprising” after the anthology series “Small Axe,” talked to Variety about the memories he cherishes of Michael K. Williams, who died on Sept. 6. The actor played Robert in M…
Selome Hailu
Eonline.com
Jurnee Smollett Pens Gut-Wrenching Tribute to Michael K. Williams as He's Laid to Rest
Jurnee Smollett is honoring the legacy of the late Michael K. Williams. Just days after the actor's heartbreaking death, his Lovecraft Country co-star took to Instagram to...
Kisha Forde
Independent
Michael K Williams: Former dancer who played scarred anti-hero Omar Little in ‘The Wire’ **PICS ADDED***
He danced in music videos with Madonna and George Michael before Tupak Shakur gave him his break as an actor
Anthony Hayward