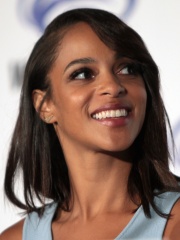 Ebubennem Megalyn Ann Echikunwoke ( MEG-ə-lin eh-CHIK-uun-WOH-kay; born May 28, 1983), also known as Megalyn E.K., is an American actress, known primarily for her roles in television and film. Born in Spokane, Washington, Echikunwoke was discovered while performing in a theatrical production for an arts academy, and began working professionally at age 15, appearing in an episode of The Steve Harvey Show. Between 2001 and 2002, she starred as Nicole Palmer, daughter of David Palmer, on the Fox series 24, followed by guest roles on ER and Buffy the Vampire Slayer. Read more on Wikipedia

Since 2007, the English Wikipedia page of Megalyn Echikunwoke has received more than 2,422,419 page views. Her biography is available in 19 different languages on Wikipedia making her the 8,231st most popular actor.