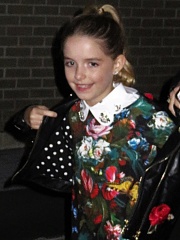 Mckenna Grace (born June 25, 2006) is an American teen actress. She began acting professionally at the age of six, her earliest roles including Jasmine Bernstein in the Disney XD sitcom Crash & Bernstein (2012–2014) and Faith Newman in the soap opera The Young and the Restless (2013–2015).Grace is known for her role as Penny Kirkman in the ABC/Netflix show Designated Survivor. She is also known for portraying Rose Harbenberger in the Netflix comedy series Fuller House (2016–2020), Mary Adler in the Marc Webb drama film Gifted (2017) and young Theodora Crain in the Netflix supernatural horror series The Haunting of Hill House (2018). Read more on Wikipedia

Since 2007, the English Wikipedia page of Mckenna Grace has received more than 4,699,800 page views. Her biography is available in 18 different languages on Wikipedia making her the 8,017th most popular actor.

Among people born in 2006, Mckenna Grace ranks 3. Before her are Prince Hisahito of Akishino and Jacob Tremblay.