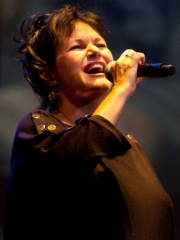 Claudine Luypaerts, better known as Maurane (pronounced [moʁan]; 12 November 1960 – 7 May 2018), was a Francophone Belgian singer and actress. Brought to light in the 1980s with her role as Marie-Jeanne in the second version of the rock opera Starmania, her best-known titles are "Toutes les mamas", "Sur un prélude de Bach" and "Tu es mon autre" (in a duet with Lara Fabian). Read more on Wikipedia

Since 2007, the English Wikipedia page of Maurane has received more than 210,516 page views. Her biography is available in 16 different languages on Wikipedia making her the 1,418th most popular singer.

Page views of Mauranes by language

Among singers, Maurane ranks 1,425 out of 3,001. Before her are Zemfira, Joey Belladonna, Souad Massi, Bob Welch, Alaska, and Charlie McGettigan. After her are Yunho, Beth Ditto, Barney Greenway, Bobbie Gentry, Doc Pomus, and Tina Weymouth.