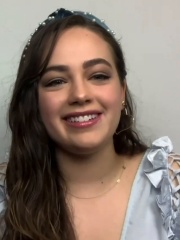 Mary Matilyn Mouser (born May 9, 1996) is an American actress. She is best known for her role as Lacey Fleming on the ABC series Body of Proof. She took over the role of Karen Grant, Fitz & Mellie's daughter on Scandal in Season 4. Read more on Wikipedia

Since 2007, the English Wikipedia page of Mary Mouser has received more than 1,444,172 page views. Her biography is available in 16 different languages on Wikipedia making her the 8,450th most popular actor.