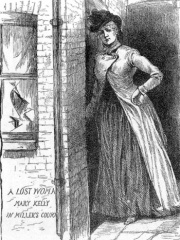 Mary Jane Kelly (c. 1863 – 9 November 1888), also known as Marie Jeanette Kelly, Fair Emma, Ginger, Dark Mary and Black Mary, is widely believed to have been the final victim of the notorious unidentified serial killer Jack the Ripper, who murdered at least five women in the Whitechapel and Spitalfields districts of London from late August to early November 1888. At the time of Kelly's death, she was approximately 25 years old, working as a prostitute and living in relative poverty.Unlike the other four canonical Ripper victims—each of whom had been murdered outdoors and whose mutilations could have been committed within minutes—Kelly was murdered within the sparsely furnished single room she rented at 13 Miller's Court, affording her murderer an extensive period of time to eviscerate and mutilate her body. Read more on Wikipedia

Mary Jane Kelly is most famous for being the last of the five victims of Jack the Ripper.

Among religious figures, Mary Jane Kelly ranks 991 out of 2,238. Before her are Euthymius the Great, Benedict the Moor, Adalbert of Magdeburg, Walter Kasper, Nicanor the Deacon, and Mary Magdalene de' Pazzi. After her are Arsenius the Great, Saint Petronilla, Leonardo Boff, Saint David, Primož Trubar, and Servatius of Tongeren.